University of Limerick will harbor another 17,000 students from across the world on Monday, yet for our week long adventure meeting those studying abroad from the States, we also have encountered students within the Eramus program otherwise known as the individuals attending the institute from a country outside North America. As far as I have gathered, non-Americans[or exchange students] are residing in areas off campus much farther from us and the Irish who are integrated into our villages as well. Somehow ‘Robin 59’ as we call ourselves(the name of the apartment and number of the apartment within our village Thomond Village] collected myself, Kellianne who also goes to Chapman and 4 other International students. With the luxury of having access to the various cultures of my flatmate’s countries, a dull moment never passes between the language lessons, laughter over accents, and often commonalities we constantly seem to discover among ourselves.

You could say I’m having a blast and a half[one of the many American phrases I have taught my flatmates].

Let’s see; it has only been a few days since I last posted a lengthy blog post of my never ending adventures, yet I truly am not exaggerating when I say I am busy every minute. I barely have had an hour to actually jump onto the website listing our modules[Irish word for classes or courses] to figure out what I’m actually doing here. Oh yeah, education? What tis this thing you speak of?

Unfortunately several of the modules I had had approved by my California institute are not available this semester, so I have found I have to review the Book of Spring courses yet again. Bah. Well so far these are a few I hope to dabble in this semester:

I will only be taking 5 modules over the course of my stay, however, all five happen to be on the best day of the week! Sarcasm my friends. Monday is when you roll out of bed without access to the function capabilities of your system. The awakening tea bags of strong Irish Tea sit oh so close in the kitchen, yet oh so far at the same time. Basically now comes the part when I look into classes that fit the 300 or 400 level requirements that I need for my major despite the lack of interest I thrust toward them and the unfortunate day they fall on. Commencing the possibilities are

I will keep a positive outlook since at UL, you can ‘sample’ the classes for the first two weeks to see if you wish to take them for the entirety of the semester, and if that is the case, continue to enjoy the impossible to understand Irish accents of the professors. Hopefully I will develop an ear or two for their way of speaking…where is my four leaf clover guiding the way? Blarney Stone visit anyone?

Though I have had a fair amount of difficulty deciphering the tipsy tongue of the Irish, official Orientation occurred with speakers easily comprehendable and as always with the kindest of hearts. We reviewed several subjects ranging from the adjustment to culture shock, to buying a new phone[yes putting away my iPhone 5 crotch and heading back into Dinosaur phone territory], to more commonly used words by the Irish. We were also treated to an overview of the ‘Irish Music + Dance’ module by a small woman, and a man with probably the biggest beer belly I have ever seen. Sure he seemed intimidating by this attribute and his powerful height upon first walking out, but when he joyfully exclaimed, ‘I know I am a fucking good teacher’ , explained the concept of the course and finished with a performance on one of the instruments descended from this beautiful country[and one that a student can potentially pick up and learn for the class to eventually perform at the end of the semester or do the same with dance as well], I mentally slapped myself for being a judgmental American. Yeah, I know. The Irish are just a little awesome. 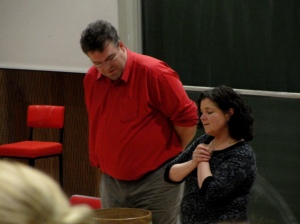 This jolly man played the wooden flute like no one’s business; a piece similar to Flight of the Bees. Wowzah.

Following this first piece of Orientation, we were allocated to groups of about 12 students and taken on a tour of the quite large campus. 250 acres to be exact. Chapman is incredibly condensed and you can walk from one side to the other in about 8 minutes. It takes me at least fifteen minutes just to walk from my village to the edge of UL[University of Limerick noobs] and another twenty to reach the opposite side. You could say my calves have noted the increase in walking distance. Luckily I had several people on my tour whose company I really bonded with despite our tour guide’s lack knowledge of where he was going, and the accommodating spirit of the Irish. Even though he was upset by my trailing of the group to take pictures[I really was only ten feet behind], I was able to capture a few to show the lovely people reading this mammoth of blog.

The view from our Library and a thankful Annie for Wi-Fi.

Our tour guide posing with ‘Brown Tom’, a statue made my an artist who claims the shape is up for interpretation. This statue is randomly placed in the middle of the Main Building’s plaza making me think there is a person there every time. 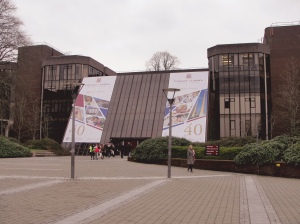 ‘The Slopes’ as they call this area of campus or formally known as the Main Building.

A candid photo of our tour group. 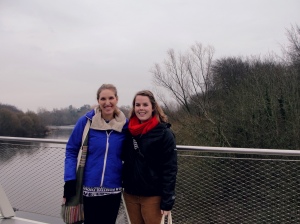 I found another Annie who lives up to the name. I predict we will be great friends; she empathized with my wimpy perception of the cold despite being from Wisconsin. 🙂

As we crossed the ‘Living Bridge’, we discovered even more beauty: the residence of swans.

I must say, a huge chunk of my decision to attend Chapman University stemmed from my instant connection with its modern architecture and well crafted landscapes.  California has nothing on Irish buildings which also might I add feature the Futura typeface[I’m a typography nerd] 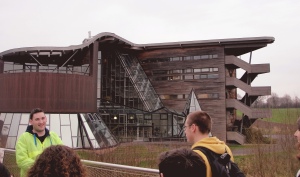 Such a mix of materials, shapes, and levels~This is one side of the Health Sciences Building…I would feel better just staring at this epic building.

The back of the same building as above; could it be more futuristic?! 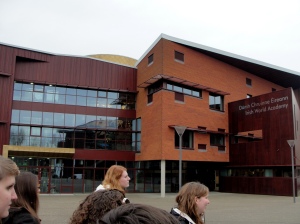 A long tour indeed, yet by the end, I had made so many more friends. After the tour, I met up with my buddy Cam who hails from the land of the Aussie. Yes ladies and gents he has an Australian accent. I would be lying if I didn’t say I swooned just a tad when he first began talking, but since meeting him earlier that day, I knew we be great ‘mates’ from our common obsession with tea.

I ended up parting ways with the group and Cam, and had initially planned on hitting the Stables Club again, yet with the pouring rain outside and far walk we would have to endure, our flatmates decided it would be best to chill at home. Robin 59 for the win. I honestly think I am going to lose ten pounds just from laughing. I can not say enough good things about my flatmates. For all you music buffs out there, I myself am a music snob so first let’s put it out here in the open and now I recommend as one music snob to another, Yves pick of a Swiss band known as ’77 Bombay Street‘. Up in the Sky is absolutely fantastic.

Several more events have commenced seeing that it is Sunday and I have only discussed up to Friday…this blog business is going to challenge me, but I will try my best to document my eventful travels as soon as possible. Until tomorrow,